History has to be interpreted with the available facts. Then is born an assertion, which may not be to the liking of some. Consequently, they start looking hard for facts to punch holes in that assertion and thereby grows History – a mix of facts and undisproved assertions.

Tamil, of all the Indian languages has an advantage which no other language has – a script which is old and without much departure from the oldest Tamil script – thereby ‘proof’ could be looked for either from the inscriptions or cave scribbling or copper plates or even palm leaves. But there are languages which claim hoariness even more than Tamil, but when asked for proof, want of a script has been a severe stumbling block and therefore Belief is the basis & proof of assertions. We as decent individuals will have to respect their beliefs. But one thing to remember is that when even the written word changes it’s meaning with usage, relying on a oral tradition without a script to transcribe words for the future generations exposes such languages to be posited with meanings unascribed at the time of composition and also susceptible to be altered by the spirit of the Times.

Tamil is no such language – its basis is in facts, provable facts.

Though the purpose of my blog is not to eulogise Tamil, we need to look into the relationship between Tamil with the rest of India, to have a grasp of its place at any given time.

During the beginning of the 7 th century AD, there were two kings of great stature, one was Harsha Vardhana and the other was Pulikesi II of the Chalukya Dynasty. Harsha was reigning north of the Narmada and Pulikesin II was to the south of It.

Harsha Vardhana was an enlightened king, a loyal friend, great ruler, a warrior and above all one who understood the value of structured studies.

This Great King was ruled from Kannauj. His name doesn’t figure in the following list –

Narasimhavarman I is claimed to be one of the 12 Indian kings who never lost on the battlefield to their enemies, the others being Ajatashatru, Chandragupta Maurya, Karikala Chola, Cheran Senguttuvan, Sri krishnadevaraya of Vijayanagar empire, Chola king Rajasuyam Vaetta Perunarkilli (575 BC), who successfully completed military Rajasuyam sacrifice, Pandyan Nedunchezhian of the Sangam age, Samudragupta, great Pallava Nayanmar saint Rajasimha, Rajaraja Chola I, his great warrior son Rajendra Chola .

So Harsha Vardhana is left out. Not only is it left out, but the fact that he lost to Pulikesin II of the Chalukyas appears as a footnote in muted tones in the text books. I remember the History Text book, in which Harsha was devoted an entire chapter. I still remember a pencil sketch of Hieun Tsang – which for the life of me, I couldn’t spell it the way it was transcribed into English in my school text books.

The Hindu newspaper in one of articles had stated that a contemporaneous copper plate had been discovered, which is supposed to have on it the fact that Harsha was defeated by Pulikesin II in the year 612 AD or CE, give or take a few years.

Harsha’s contribution to the Nalanda University has been well documented. Heuin Tsang has praised the king as having been a righteous king. Yet, his defeat in the hands of Pulikesin has been an indelible blot on all his other achievements. But we have to look at the defeat in its perspective too.

An aggressor getting defeated when he trenched upon another man’s territory, is not so bad as when he loses his own territory after being defeated in the battle as an aggressor. To that extent Harsha Vardhana was not a loser. Harsha just couldn’t make forays into Pulikesin’s territory beyond the Narmada. All this happened in 612.

The same Pulikesin II in 642 AD, was defeated by a king from the Pallava dynasty. His name was Narasimhavarman, whose name figures in the list of the undefeated kings from India.

What is so great about Narasimhavarman? The King’s father was a contemporary to Harshavardhana and was also subjected to forays of pillaging and plunder in those territories controlled by him. His son was Narasimhavarman I.

The interesting part is the nature of the defeat of Pulikesin at his hands, Narasimhavarman not only defeated Pulikesin but pursued him to his state capital at Vatapi (presently called Badami), a place in the present day Karnataka and capital of the Chalukyas and took over his whole empire and set up an administrative machinery in Vatapi and returned. I can’t remember another King in India who had avenged the maltreatment of his father like Narasimhavarman did. The same Hieun Tsang visited Kanchipuran during the reign of Narasimhavarman. Hieun Tsang’s account of Harsha Vardhana’s defeat is the only reliable source of that fact, as the Court historian cum poet Banabhat doesn’t mention anything of the defeat of Harsha in his Harsha charita. Wikipedia’s take is as follows:

Harsha’s court poet Bana does not mention this conflict in his biography Harsha-charita, presumably to avoid portraying his patron in a negative light. However, Pulakeshin’s success against Harsha is confirmed by other independent sources. The Chinese traveler Xuanzang, who calls Pulakeshin’s kingdom Mo-ho-la-cha (the Chinese transcription of “Maharashtra”), provides the evidence of Pulakeshin’s success against Harsha. Xuanzang states that Shiladitya (that is, Harsha) had conquered the nations from east to west, and had marched with his army to remote parts of India: only the people of Mo-ho-la-cha had refused to accept his suzerainty. Xuanzang further states that Harsha gathered troops from different parts of his kingdom, summoned his best commanders, and himself led the army to punish the people of Mo-ho-la-cha, but could not subjugate them.

To have a fair idea of the Empire of the Chalukyas of Badami, one has to look at the territories they controlled. The whole of the present day Karnataka, most of Andhra Pradesh, the whole of Telangana, whole of Maharashtra, half of the non peninsular Gujrat and south western quarter of Madhya Pradesh. 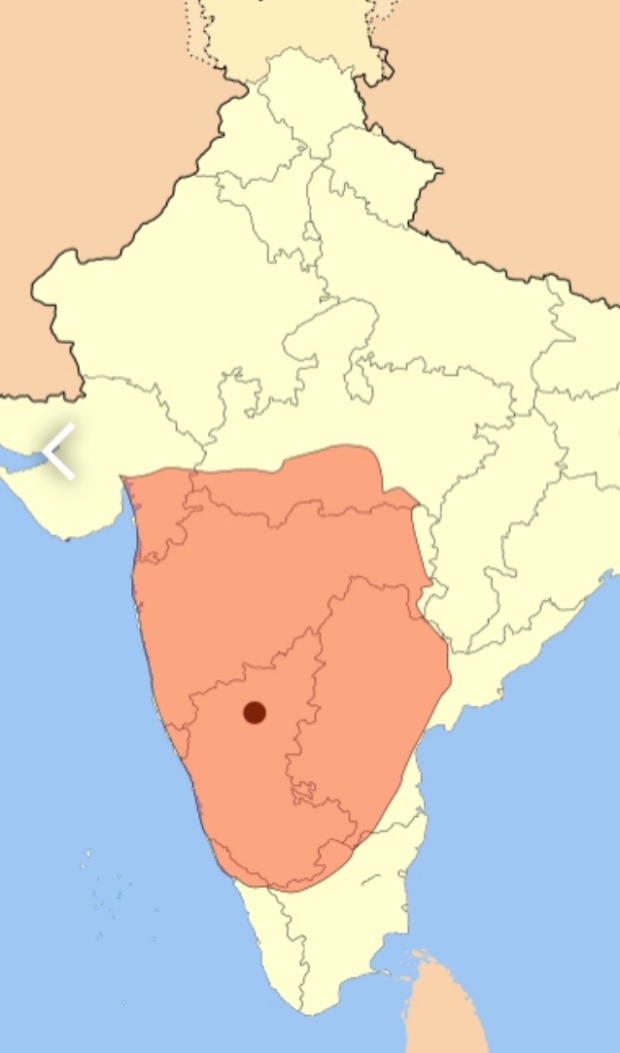 The above, marked in saffron, was the territory of the Western Chalukyas of Badami (Vatapi).

Now compare it with the territories controlled by Harsha Vardhana from the below map: 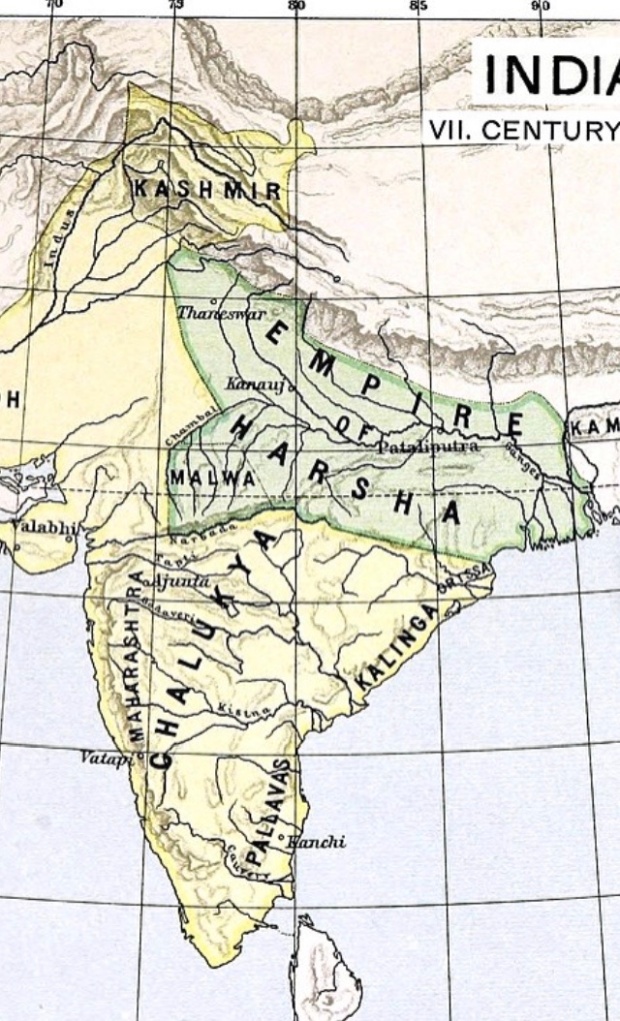 Therefore, the Empire of Harsha consisted of the present day Uttarakhand, Uttar Pradesh, Bihar, Bengal, most of Madhya Pradesh, Chatisgarh, Jharkhand, parts of Haryana and Punjab.

No doubt, anyone with those resources ranging from the Himalayas till the banks of Narmada should have defeated a king like Pulikesin II, but that was not to be.

Even more interesting is that the Pallava kingdom was not even one third territorially as spacious the Chalukyas.

Yet, Pulikesin II who is reported to have defeated Harsha was defeated by Narasimha Varma Pallava and not only that he defeated Pulikesin II, he marched up to Badami/ Vatapi and established an administrative set up there for 13 long years. Yet, after the death of Narasimhavarma the Chalukyas not only reclaimed their territory but defeated the Pallava kings.

History writing is very tough, especially when we belong to a region where we are fed with false histories and have converted those historical figures to icons.

Basically, history in India has been an exercise to inspire heroism, heritage and not for factual reportage.

As such, I’m not surprised that Pandit Nehru in his Discovery of INDIA had very little to say of the Ancient kings of Southern India.

In these circumstances how can we designate Harsha as The Great? Neither can we call Narasimhavarma the Great, as his legacy did not even last beyond his rule. The very next ruler of the Pallava dynasty lost all the gains reflecting a poor integration of the territories won coupled with an inability to maintain the discipline or tempo of a king like Narasimhavarma.

No wonder, neither Harsha nor Narasimhavarma made it to the epithet The Great.