In the early eighties, my Professor Eugene D’Vaz in one of his lectures made a passing reference on Giotto and contextually said that a Pope was able to identify the drawer of the circle among many other competing paintings presented to the then Pope vying for his attention and the concomitant patronage.

In the first year of graduation it wasn’t easy to ask for the sources to one’s Professor, neither did I have the nerve to ask.

I legged it to the library and asked the librarian if there was any book on Giotto, he told me to check the decimal dewey system and find out for myself.

Well I couldn’t make out what decimal- dewey was. Any way I walked up to the section on Art & Architecture and browsed a few volumes and got carried away by a tome titled 100 GREAT PAINTINGS. After perusing a few plates, I was ashamed that someone might watch me ogling intently at those nudes, with that juvenile guilt writ all over my face, I quickly closed the book and left it at the table nearby, as I had forgotten the exact place from where I had taken the tome!

Decades passed by with no thought of the Circle and Giotto, even though I had seen some of the photographs of his paintings.

Fortunately, as I was going through Vasari’s LIVES OF THE ARTISTS, Giotto’s life was the first and what I found there resuscitated the doubt I had 3 decades back and gave me a graphic detail of how the Pope identified Giotto’ circle!

The screen shots are extracted and placed below, for anyone who cares to read!

A great Professor like Eugene D’Vaz never leaves you, he stays and triggers thoughts even after years of preoccupation of “preparing to Live”‼️ 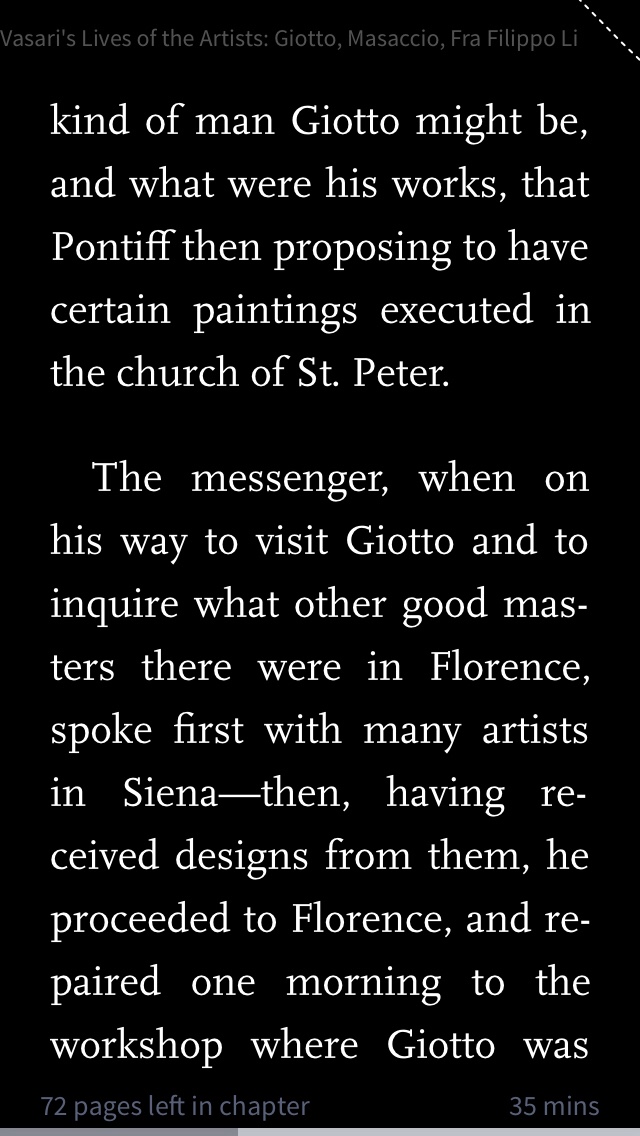 When one’s time for Thankfulness has arrived, he would either receive a benefit for which he would become thankful; or he would discover a preexisting reason to be thankful for‼️

The difference between a person who affirms the Resurrection of Christ, affirms it based on his Belief; whereas, the man who denies the resurrection of Christ, at best could only rely on common sense and assert that Jesus could not have self-resurrected!
Through denial, he closes down his options for belief in such a possibility, on common sense grounds.
But there arises a time in everyone’s life to go against COMMON SENSE, as common sense itself is built on the five senses and the tools which reveal more to the five senses, and common sense fails when those senses are assaulted by ‘possibilities’!
It is when he realises the limitation of his senses that he is driven to belief on EPIPHANIES. Once a person’s mind is prepared for belief on ‘possibilities’ , it is merely a question of ‘which belief system’? Thereafter his proclivities, his earlier knowledge, and his attendant circumstances come into play.
The mind and soul get their relief through BELIEF and not through questioning every Belief, the mind and soul cling on to some belief and the process of ASSERTION starts and ends up in an AFFIRMATION! It is that affirmation which becomes a part of the self.
I am amazed at those who do not know the names of their great-grandfathers, accusing others of conversion.
It is steeped in a belief that they must have been of a particular ‘belief system’ that a geographical territory is supposed to have had!
Such beliefs are sanctified, whereas, when a person has consciously subscribed to a new religious belief, he is assailed as having given in to those ‘perks’. It is risible that those accusers’ Beliefs are in no way superior, in fact they are inferior as there is more traditional pressure in their acceptance of the beliefs of their forebears, than an informed rational choice, in their following a faith of their fathers!
Liberty in such matters is highly recommended, as no one knows for sure as to what system exists after death – whether like a Judeo-Christian-Islamic one time judgement for all deeds done while in the earth; or enter the cycle of rebirth till one attains the Ultimate; or extinguishing of all memory in time.
No one knows, why do we strive for proving superiority of one assertion over the other?
Just like a person is judged by the law to which he subscribes, each person is to be judged by the accepted standard Religious Beliefs to which he subscribes.
Social laws should be separated from the Religious laws, unless through secular means we arrive at a conclusion that certain religious beliefs are inseparable even in secular matters.

When the rusted shackles fall off your wrists, Fool don’t believe that you overcame the shackles, you just outlasted those shackles. And…. everyone resurfaces!‼️


Just as clarity improves during the endgame of chess because of fewer pieces on the board, in Life as one ages, with fewer resources, clarity dawns and gives everyone the vanity of perspicacity!

If the Hon’ble High Courts were to criminalise acts, which are exempted under the existing criminal laws of the land, based on Fundamental Rights against Discrimination, would that be fair?
When a husband misapplies his conjugal rights without the consent of his own wife, would that tantamount to Rape? The Inshorts message says, YES.
The argument which appears to have been applied to arrive at the above judgement doesn’t seem to be sound to me as the ‘right against discrimination’ is a guarantee granted by the Constitution against exploitation and deprivation without an intelligible differential.
In the case of a Rape, even if there is no consent, or any of those ingredients necessary to constitute Rape, the preexisting CONJUGAL RIGHT, excludes a man from being treated as a Rapist.
I guess, for want of any other section to penalise the husband, to invoke the charges of Rape against the husband seems inappropriate.